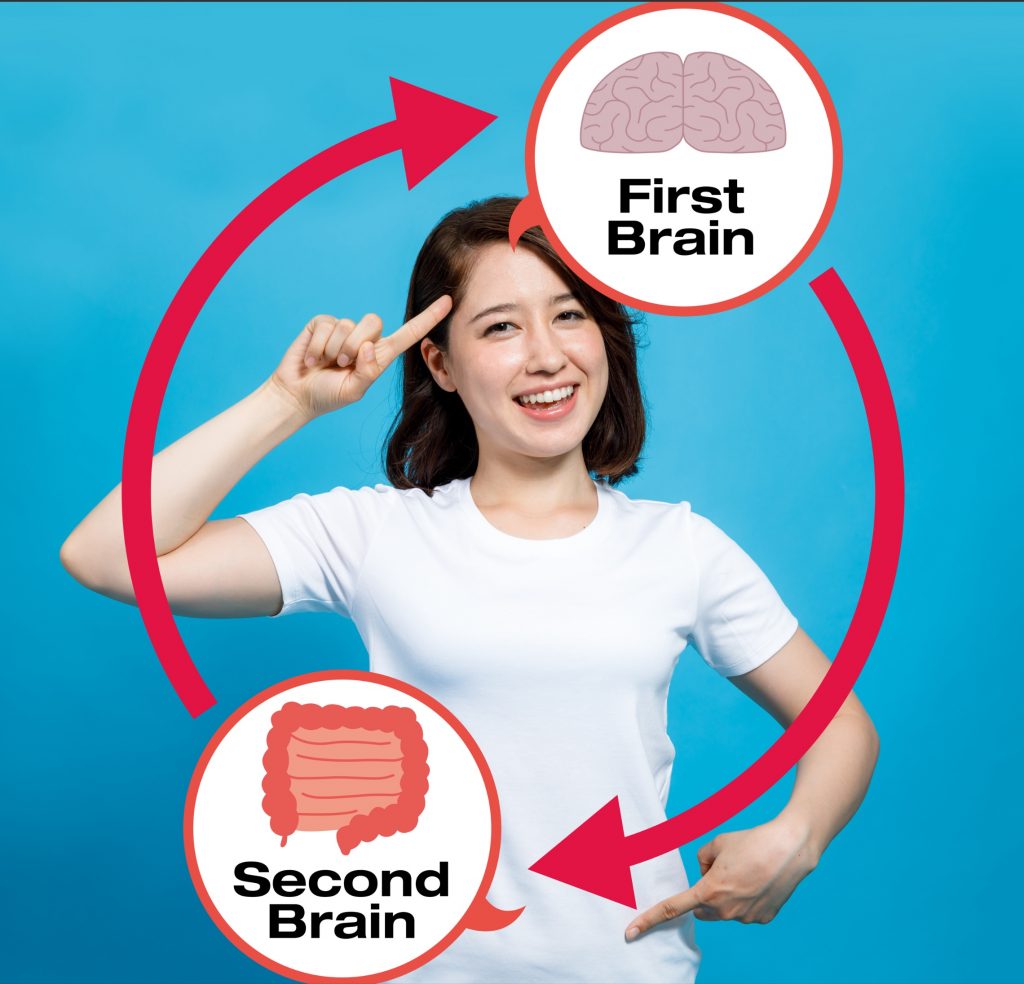 Have you ever had a “gut feeling” you couldn’t explain, or wondered why “butterflies” in your stomach accompany certain emotions? It’s not all in your head: the truth is, you have a second brain! The second brain, known as the enteric nervous system (ENS), is located in the walls of the digestive tract. Research on the ENS continues to shed light on the gut-brain connection, and how digestive health can affect our mood, memory, and cognitive function.

The ENS is made up of over 100 million neurons (nerve cells) that line your entire gastrointestinal (GI) tract. It can operate independently of the brain, controlling functions such as swallowing, release of enzymes, and other digestive functions on it’s own. While this “second brain” is not directly involved in complex thought processes such as political debates or philosophy, it does affect things like mood, memory and overall brain function.

Until recently, it was assumed that anxiety and depression contributed to things like IBS, stomach upset, and loss of appetite. We’re now finding that it may be the other way around, and that irritation in the GI tract may send signals to the brain that trigger mood disorders.

Your gut and brain communicate through a system of nerves and neurotransmitters– chemical messengers that transmit signals between different areas of the body and brain. Neurotransmitters affect mood, sleep, digestion, and pain, among many other processes. Most of these neurotransmitters are actually produced in the gut, not the brain, although they affect both. They are produced by tiny organisms in the gut called microbes, made up of different types of bacteria, yeasts and fungi. Some of these organisms can make us sick, but many are important for health and function of our gut and brain.

One example of a neurotransmitter produced by these microbes is serotonin, commonly known as our “happy” neurotransmitter. Serotonin regulates mood, sleep, and libido, along with various digestive functions. Over 90% of the body’s serotonin is produced by bacteria in the gut. Therefore, if there is an imbalance in the gut, our brain doesn’t get enough serotonin and symptoms such as insomnia, depression and anxiety can occur.

Gut bacteria also produce a short chain fatty acid called butyrate. Butyrate helps protect the blood-brain barrier, a protective lining that blocks harmful substances from entering the brain. Poor gut health leads to lower butyrate production and a breakdown of this barrier. This, is turn, allows toxins to cross over and cause inflammation, resulting in symptoms such as brain fog, poor memory, and decreased mood.

Maintaining a healthy gut and blood brain barrier can be challenging. Poor diet, environmental toxicity, and high stress lower gut function by decreasing healthy bacteria.Bacteria compete for space in the gut, so as healthy bacteria are killed off, harmful bacteria can take over. On the other hand, increasing good bacteria can “crowd out” bad bacteria and help restore balance.

One way to restore balance is eating foods high in both probiotics and prebiotics. Despite their similar names, the two operate quite differently. Probiotics are live strains of healthy bacteria, whereas prebiotics are types of dietary fiber that feed friendly gut bacteria. Some of the best foods to increase beneficial bacteria and improve overall gut health include:

Remember that millions of nerves and neurons run between your gut and brain! Neurotransmitters and other chemicals produced in the GI tract don’t just act locally- they also the brain. Improving bacterial balance and overall health of the gut, may help boost brain function and improve things like mood, memory, and sleep.